About the Concord Lift

The Goal is to provide the lowest cost per ton / mile of cargo transportation.

Aircraft engineers (of which I am not) design the aircraft to meet the required specifications. They balance a number of intersecting and competing issues.

The power required for lift is in general separate from the power needed for speed.

The power needed for speed has a geometric increase in the power needed ( again it is not quite so simple but in general twice the speed needs the square ie 4 times the power.) Since going faster means it will take less time for the engine to use fuel, the fuel used does not increase at the same rate. Slower is lower fuel cost.

There is a relationship between size and construction cost. Other things being equal increase in cost is rises slower than increase in size. There is an advantage in going larger. Runways are 150 ft. wide. The standard for terminals is an 80 meter box, length and width.

The cost to build is affected by speed and altitude. Slow speed, low wing loading, unpressurized is less costly to build. However slower means larger wings for the same load so larger wings increase cost.

Altitude and cost are not so simple. Higher requires faster since the air is less dense. However the same speed at high altitude does not need as much power for the same reason. The 747 could never go so far at low altitude.

The design constraint in this version was 20 lb. square foot of wing load for very slow speed. Engineering studies may find a higher wing load, higher take off and cruise speeds better. It is possible to design Concordlift ™ for high speed, high altitude, high wing load. I have versions like that for cargo and very high capacity, 1400, passenger use. They might have an acceptable cost per ton mile. 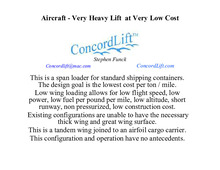 PDF
"This Power Point is a quick overview of the original paper. The illustrations show a few of the many different possibilities. The unique take off procedure illustrated may be unnecessary in some versions. “
The illustrations are by an artist illustrating selected features.and not the result of aeronautical engineering.
The actual aircraft may have a different appearance. 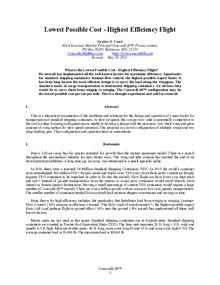 This is a “Thought Experiment”.

Basic theory for high efficiency includes: Spanloader, that distributes load from wingtip to wingtip, Laminar-Flow Control and large Aspect Ratio. No aircraft has been able to include all these well known factors. The unique ConcordLift™ configuration is required to achieve the Highest Efficiency Flight and the Lowest Possible Cost.

ConcordLift™ has been seen by thousands at AIAA events and many more have viewed this web site. No one has ever suggested a reason why this could not fly as proposed or that it would not be profitable to build and operate. The greatest problem is that it is by an outside amateur. ConcordLift™ is available for sale or license to qualified entities. 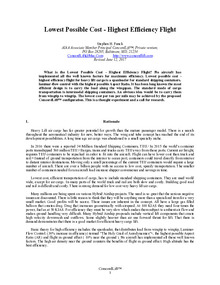 PDF
This revision was made because I realized that the original idea of joining and separating the sections in flight was impractical. I took years trying to and finally coming up with a potential process. 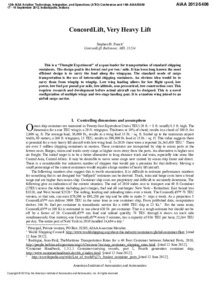 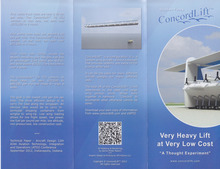